Politopedia Foundation responds to the mission of promoting constant and adequate use of technical and scientific evidence in daily work of Governments, Parliaments, and decision makers, as well as bringing evidence closer to citizen’s daily life.

To fulfill this mission Politopedia Foundation has sought a great ally in the compilation and synthesis of scientific evidence: Epistemonikos Foundation, with whom we share the dream of creating a consortium of non-profit entities that promote public policy informed by evidence. 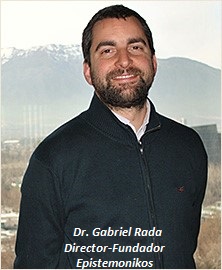 We interview Dr. Gabriel Rada, founder of Epistemonikos, who tells us the challenges and achievements in evidence and public policy.

How and why does the initiative to create Epistemonikos Foundation arise?

As a physician, from very early in my career I have been linked to Medicine Based on evidence. In 2009, motivated by the fact that the scientific evidence was increasing dramatically, we came up with the idea, together with the engineer Daniel Perez, to create a database that had all the scientific evidence in the same place, easily accessible in several languages. The pilot program succeeds, and paved the way for the launch of Epistemonikos Database in 2012.

As the project grew, people from all around the world and academic spaces join, deciding that it was appropriated to create a foundation to give sustainability to Epistemonikos database and to incorporate people who were not in the academic field, to give independence, transparency, and reliability to the project. Epistemonikos Fundation began to operate in 2013, and nowadays we collaborate with multiple national and international projects in the field of heath informed by evidence, including the GRADE group and Cochrane Collaboration.

In the field of medicine, what role does Epistemonikos play in the generation and transfer of knowledge?

It plays a very important role. I would say that the first step we are looking for with the database is to have all the scientific evidence in one place. It a huge challenge, but we are moving fast. Today is the world´s largest health evidence database.

The next step, in which we are already working, is to have all the knowledge organized, so that each of the questions, whether of a patient or a decision maker, may be reflected in the database and the information is found instantly.

As the founder of Epistemonikos and a leader in systematic review research, do you think there has been a narrowing gap between the reproduction of evidence and the use of it in clinical practice and health policy in Chile?

Yes. That gap has decreased in health research. Today it is extremely rare to find people who are opposed to make decisions incorporating the evidence somewhere in the process.

Among political decision-makers, I would say that there is a good perception, although in this case there are different appreciations of the importance of evidence and other aspects in the decision-making process.

Which countries per their experience are innovators in the use of evidence?

In many aspects, the United Kingdom leads development in this area. There the Cochrane Collaboration was born and much of the evidence that is produced is generated in the UK. Half of the Cochrane groups are in the UK and many of the centers that are innovating in terms of incorporating other areas of research such as education and social science are in the country. UK is a pole of methodological innovation.

But there are many other interesting countries, such as Canada, leading the area of clinical practice guides and evidence based practice. Norway is also a pole of evidence production, as well as the innovation in applying evidence to health policies and bringing evidence to low-income settings.

On the other hand, I dare to say that Chile is positioning itself in technological innovation. Chile has a very good professional level and there is a promoting innovation policy that is begging to give good results.

What satisfactions has this project brought you, and what contributions has it made to the world of Evidence Based Medicine?

Many. I think the first great satisfaction is to see that you can carry out a project that is very ambitious.

But the greatest satisfaction is the response of so many people. The response of medical students, young physicians, and colleagues associated to other institutions has been spectacular. This project would not be possible without having found resonance in those people who voluntarily contribute to the project with great enthusiasm.

At the recent meeting of the Cochrane Collaboration in Seoul, Epistemonikos was recognized as a member in strategic alliance, what does this achievement mean for the foundation?

It has a tremendous significance, because the Cochrane Collaboration is the most prestigious institution in this area, and for the decision makers to say that there is a Cochrane review on its virtually synonymous with the truth.

Part of the agreement is that when people research in the Cochrane Library, the information from Epistemonikos will appear collectively, which is a huge showcase in terms of reliability and rigorousness behind this project. In addition, it is acknowledgment that both Epistemonikos and Cochrane share the same values and have a common vision. The alliance between Epistemonikos and Politopedia Foundation, what are the common synergies and vision that inspire the alliance of the promotion of evidence? The role we have define for Epistemonikos is technical. In delivering reliable and using information to decision makers. However, decision makers are receptive to it, or are not prepared to use evidence appropriately in the decision-making process.

To influence, all this requires skills and expertise that others have, such as Politopedia Foundation. To generate changes, resources, skills, networks are needed. The only way to achieve this is through alliance between all of us who share the same mission.